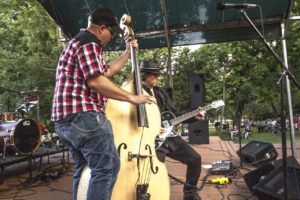 The energy that you and the band gave off was contagious and the community loved how enriching and up-tempo the music was from The Vinyl Stripes and how you actually included the audience in some songs! The positive feedback from the attendees was undeniable! Thanks again for an outstanding performance and best of luck in your future endeavors!

You sounded great! We would love to have you back next year.
Valerie Jay Mayfest Manager

Everyone loved you guys and you drew in a great crowd!
Angela Colton Director-Woodlands Waterway Arts Festival

Your show was awesome!

You guys were awesome!! We will definitely call you again!
Amy Hollywood-Director Crossroads Film Festival

“Everyone is already asking about having you back for another show”!
Laurie Schotz-Artesia Arts Council 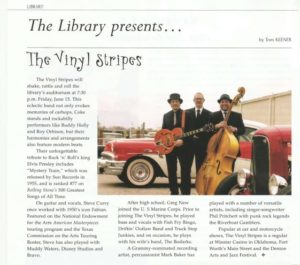 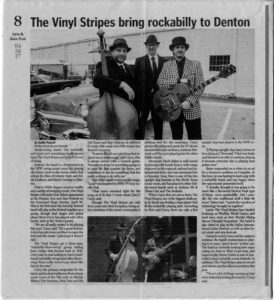 Nifty album from this Texas rockabilly/surf trio that rocks the house to the foundation. Musicianship is first and foremost in this band. All three members are unbelievable musicians and have a very full, rich sound. That is a credit to the expert playing of guitarist and vocalist, Steve Curry; vocalist and bass player, Gregg New; and, vocalist and drummer, Mark Baker.

This music is rock and roll in its purest form. That isn’t to say that there are no twists, because there are. The harmonies and arrangement have been modernized somewhat and really takes this music into this century. It is old underneath, but still has a ton of originality while paying homage to a bygone era.

If you are a fan of surf music and rockabilly, American Theme (Track 4) will scratch that itch. It is a perfect melding of both genres and even a bit of a more updated sound and styling in the chorus. Steve Curry’s guitar playing is upper echelon. And he sings and plays guitar simultaneously? I have mad respect for anyone that can do that effectively. American Theme is about driving classic cars. You couldn’t have a rockabilly band without singing a song about classic cars and being on the road. They capture that vision perfectly.

American Dream segue-ways perfectly into the next number, Can’t Go Home. This song pays tribute to The King himself with a very vintage sound and vocal arrangement. They even mention the song that they are honoring, That’s Alright Mama. Again, Curry’s guitar playing is the paint and the rest of the sound is the canvas. Curry’s picking on this track is colorful and soulful. All the colors of the spectrum are represented.

Another album that I am frankly quite tired of saying how good everything is. But, it is true. I can’t help it if this has been a banner year for independent music. In all seriousness, Vinyl Stripes is a serious heavyweight contender in the rockabilly/surf genre. I could see these guys grabbing the rockabilly belt someday soon. Get on the ground floor!